Synthetic (Mango, We Are All Astronauts, Lost Empire Remixes) 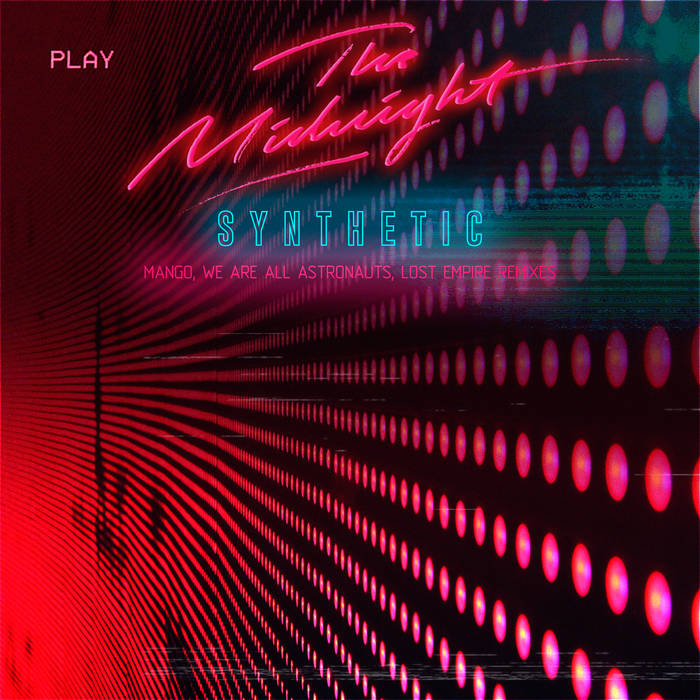 [Aardbei] I love this... it's just awesome! Favorite track: Synthetic (We Are All Astronauts & Lost Empire Remix).

Jonathan Binkley Love this remix! Favorite track: Synthetic (Mango vs. We Are All Astronauts Vocal Remix).

This past summer, we had the enormous privilege of releasing an album of remixes, in celebration of the past work of acclaimed synthwave duo The Midnight. We were thrilled to witness this release reach the Top 25 on the Billboard Dance / Electronic Albums Chart, and The Midnight have since sold out celebrated venues in both San Francisco (DNA Lounge) and Los Angeles (Globe Theatre). Our final single from "The Midnight Remixed" is a love letter to "Synthetic," a distinctive cut in The Midnight's oeuvre, given that it features a rare vocal from the band's producer, Tim McEwan. Initially showcased on the album itself, the glorious Mango vs. We Are All Astronauts remix is, of course, included here, as well as four other eclectic, yet equally inspired new takes.

Kicking off the release, visionary Boston-based composer We Are All Astronauts reveals the first of several collaborative "Synthetic" interpretations; he is joined by American producer and fellow Silk Music newcomer Lost Empire on this specific rendering. In the early going, a gentle house beat, infused with a deep, swingy groove, sits below Tim McEwan's soulful vocal. As the song progresses, a symphonic layer to the arrangement emerges, ultimately leading to a poignant, string-backed main breakdown. Signaling the full thematic metamorphosis of the song's protagonist to a non-human entity, a video-game inspired new melody line carries the midrange to the song's conclusion.

On "The Midnight Remixed," label muse Mango, alongside We Are All Astronauts, revealed his first production in years, an inspired indie-house take on "Synthetic," now appearing on this follow-up single as well. Waves of melody imbue the soundscape with touches of both melancholy and euphoria, which is to say: Mango is in vintage form from the song's earliest moments. The juxtaposition of Tim's wistful vocal with Mango & WAAA's uplifting instrumentation feels pitch-perfect for the nostalgic mood evoked by The Midnight's music, in general.

Finally, We Are All Astronauts offers his own solo interpretation, in which the arrangement is denuded of any percussive elements via a glorious, fully orchestral three-minute intro. The heartrending instrumentation, matched by Tim's affecting vocal performance, sets up a cathartic, 'post-rock' finale, in which ambient-electronic textures provide the underpinning for an edgy and, ultimately, anthemic rock score. As Tim's vocal gently fades into a sea of symphonic sounds, the coda poignantly captures the transience of life's beauty.

There is a Japanese term: Mono no aware. It means basically, the sad beauty of seeing time pass - the aching awareness of impermanence. These are the days that we will return to one day in the future only in memories.

The Midnight consists of Tyler Lyle (a songwriter from the Deep South) and Tim McEwan (a producer from Denmark). ... more

Bandcamp Daily  your guide to the world of Bandcamp